BLOCKCHAIN (BC) & BC CARDS

what are the in-game currencies?

There are three different in-game currencies: gold, crystals and gems.

what is "gold" for and how can i get it?

Gold is one of the in-game currencies. You can use gold to buy new in-game cards.

You can receive gold:

what can i use "crystals" for and how to get them?

Crystals are an in-game currency. They are created by crystallizing cards.

They can be used to upgrade or fuse your cards, or to “blockchainize” one card a month.

You can resell the in-game cards you don’t want to keep for crystals. This process is called “crystallization”.

ATTENTION: The proces sof crystallization is irreversible, the crystallized cards are destroyed!

To crystallize some cards, go to the team screen and tap the “crystallize” button. Then select the cards you want to crystallize and press “collect”.

what are "gems" for and how to get them?

Gems are another in-game currency. You can purchase gems in the Shop.

Gems can be used to purchase cards with a guarantee of a higher card rarity than when purchasing cards for gold, or to refill your stamina.

what are the numbers on my enemies for?

This is the cooldown of the enemy. The cooldown will decrease by one on each turn. When it reaches zero, the enemy will attack!

Tip: Try to kill or freeze the enemies with the lowest countdown first!

do i know the health of my enemies?

The size of the enemy’s orb is proportional to their health.

why are my shots so slow?

what are the small icons on the battlefield? should i avoid them or try to hit them?

Some of your cards have a specific power – “spell”.

When it’s their first turn, their spell appears randomly on the level map, so you can see small fire, target, shield, heal or poison icons popping up.

To activate the spell, you need to hit its icon with any of your shots during the same wave of the game round. Icons will disappear when the next wave will start and new ones will appear when it’s the next turn of your card with a spell.

Warning: your enemies can cast spells too!.

Moreover, you can randomly find a gold icon. As soon as you shoot it, you will receive a small amount of gold.

when are my cards' spells casted?

Once per wave, the spell of the active card will appear somewhere on the battlefield. If you manage to hit the spell with a shot, it will be triggered.

what do the different symbols and numbers on each card mean? 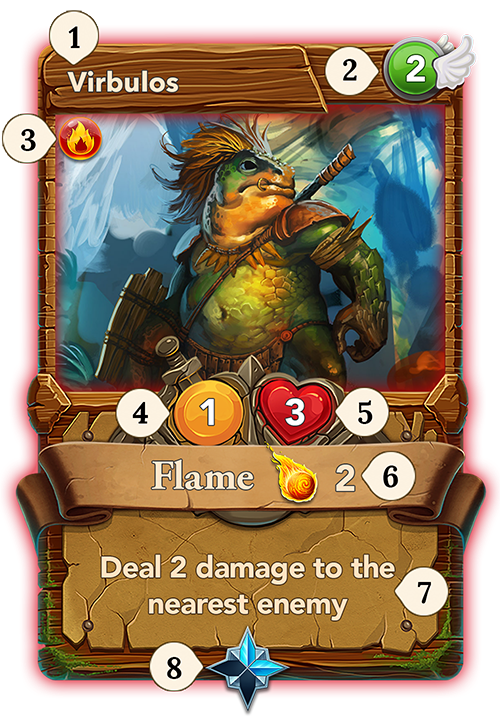 2. SPEED: The speed of a card is indicated in the green “winged” icon on the top-right of a card. The bigger the speed, the quickest the spells are dealt on your enemies.

4. ATTACK: Attack of a card indicates the strength of its attack, and indirectly the damage it can deal to your enemy. The strength is expressed in number points.

5. HEALTH: Health, expressed in number of points, indicates the strength of the card’s defense.  Your level of health is indicated by the number inscribed in the heart icon of your card.

6. SPELL & 7. SPELL EFFECT: Some cards have special abilities, called “spells”. The spell can vary according to the card’s element and may have a different strength.

For example the card above has a Flame spell. It deals 2 damages to the nearest enemy.

8. LEVEL AND RARITY: There are four cards Rarity: Common, Rare, Epic and Legendary.

how does the card element influence the gameplay?

There are six Elements in the game: EARTH – FIRE – WATER – LIGHT – DARKNESS – ICE.

The spell of a card will vary according to its Element.

FIRE: Sends a fireball on the closest enemy.

EARTH: Prevent and minimize damages dealt to your team by your enemies.

ICE: Slows down the closest enemy.

Some cards are dealing spells to all (enemies or your cards, depending on the spell), otherwise only the closest character (your card or enemy) is affected. Pay attention to this detail.

what is the link between card rarity and its evolution?

There are four cards rarities: Common, Rare, Epic and Legendary.

The rarity of a card is indicated by the shape and color of the icon below the card. Here are the rarity icons of the cards with the quantity of crystals you need to level them up:

A Level is a higher evolution of a card.

how to upgrade and fuse my cards?

Each card has a certain number of levels. You can upgrade your cards – pass on a higher level – using crystals (one of the in-game currencies). Each upgrade has a certain cost in crystals.

On the team screen, double tap a card to open the evolution screen and tap on “Level up”.

If you have two identical cards, both upgraded to their highest level, you can fuse them to obtain a new, stronger card. This card is a “dual-fused” card.

If you upgrade two identical dual-fused cards to their highest level, you can fuse them again, to get a “quad-fused” card. A quad-fused card can be upgraded again.

what is blockchain and why is it interesting for gaming?

Blockchain is a distributed ledger. It is used to guarantee a secure purchase or exchange of digital assets (i.e. SoG blockchain cards).
To learn more, download for free the “Beginner’s Guide to Blockchain in Games“.

are all the cards in spells of genesis blockchain cards?

No, there are two basic types of cards in SoG: blockchain cards and in-game, or off-chain cards.

Off-chain cards are stored in the game database and can be purchased inside the game, for in-game currencies – gold or gems. The in-game cards cannot be traded.

Under certain conditions, in-game cards can be  “blockchainized” (for more information, see the question “What is ‘blockchainization’ and how does it work?” below).

which blockchain does spells of genesis use?

Spells of Genesis is a multi-chain game, which means that it is compatible with more than one blockchain.

Currently the game supports Ethereum and Counterparty (based on Bitcoin blockchain).

where to buy blockchain cards?

Blockchain cards can be bought from the Askian Merchant.

You can also buy (or sell) blockchain cards on the secondary market.

how to find my blockchain cards in the game?

To find your blockchain cards in the game, you need to do the following:

For more details, visit our “How to start“ page.

what is "blockchainization" and how does it work?

“Blockchainization” is the process of withdrawing a card from the game database and moving it into your own blockchain wallet. In brief, you convert an in-game (off-chain) card into a blockchain asset.

Any of your fully levelled-up, quad-fused in-game cards can be transformed into a blockchain asset which is stored in your digital wallet (you have to bind your account to a blockchain wallet first), independent of the game database.

The in-game copy of the card is removed from your game account and replaced by a blockchain copy of the same card, sent to your wallet.

The card is still playable in the game. What changes is that now you have the true ownership of it, which means that you can freely sell it on a decentralized marketplace.

do all the cards exist on all supported blockchains?

No, some cards exist on Counterparty only (the “historical” blockchain used by SoG since 2014), some were issued on both currently supported chains: Ethereum and Counterparty.

Inside the game, how can I recognize if my blockchain card in SoG is a Counterparty one or an Ethereum one?

You cannot recognize this inside the game and you even don’t need to. A Counterparty card and its equivalent on Ethereum enable both the same card in the game.

If you have two cards in-game (one linked to Counterparty and another one to Ethereum token), one levelled-up and the other not, when selling one token (no matter on which chain) you’ll always keep the levelled-up card.

Will all the existing Counterparty cards be released also on Ethereum?

For the moment, only a selected cards, exisitng previously on Counterparty, were minted also on Ethereum.

A swap enabling you to move a card from one chain to another one will be enabled later.

Will any new cards be minted on Ethereum?

Yes, there are some brand new cards (not released yet on any chain) that are being released on both Ethereum and Counterparty at the same time.

Can I move my Counterparty cards to Ethereum?

At this moment, the Counterparty cards and the Ethereum ones are independent, although both enabling the same in-game card.

A swap allowing you to move a card from one chain to another one will be enabled later.

Which currency are the blockchain cards sold for?

All the SoG blockchain cards (Ethereum and Counterparty ones) can be purchased for ETH, BTC or BitCrystals (BCY or BCY ETH).

If you have not found the answer to your question above, please feel free to contact us!