In this post we are focusing on different strategic advantages of the best “Spell All” cards. Previously published while treating in-game cards only, this successful post was updated and completed with all the blockchain cards released so far.

What are “Spell All” Cards?

“Spell All” cards allow you to reach all of your opponents’ orbs with one shot, provided you are able to target the icon of the element on the battlefield. (Granted, the icon is sometimes just impossible to reach when they are behind some obstacles.)

Our advice: Be patient, always keep these Spell All cards (even the Commons) and level them up as quickly as possible!

“Strategic value” of your cards

The “strategic value” of a card depends on several factors. The card’s position in your team, the campaign and level you are playing, the enemies you are fighting, the total speed of your team may all have an influence on this strategic value. For example, a slow card may be perfectly useful in some levels and not in others. It’s up to you to test and try to compose the best Team to progress!

In terms of strategic advantage, Legendary cards are the best when they are at their maximum strength and fusion. But some Epic and Rare cards are also worth keeping, especially when you start.

The three offensive elements are Fire, Light and Darkness.

Flame All cards send orbs of fire against your enemies. They may or may not inflict fatal damages to your foes depending on their Health. They inflict a lot of damages when they are preceded by Target All cards.

Transcendental Firelord of Shadows, Legendary 4-fused from Fire Knight of Shadows, is a must have if you are lucky enough to get four Fire Knights of Shadows. At its highest evolution, it has a Health of 14 and deals 8 damages to all enemies. Among the Epics, Viscula Ladybug and Devastating Troll are very helpful, as well as the Rare Power of the Scattered Fire  and Virbulos Elite. Two Common cards are also good to have in early stages of the game : Carniath Celebration of Summer (4-fused from Carniath Potion Seller) and Viscula Tick (4-fused from Tick).

Among the blockchain cards with Flame All spell, the most powerfull one is the Legendary Quirin the Druid (Flame All 12), followed by the Epics Sir of the Ether vs Counterlord (deals 11 damages) and The Chasm (deals 10 damages to all enemies). 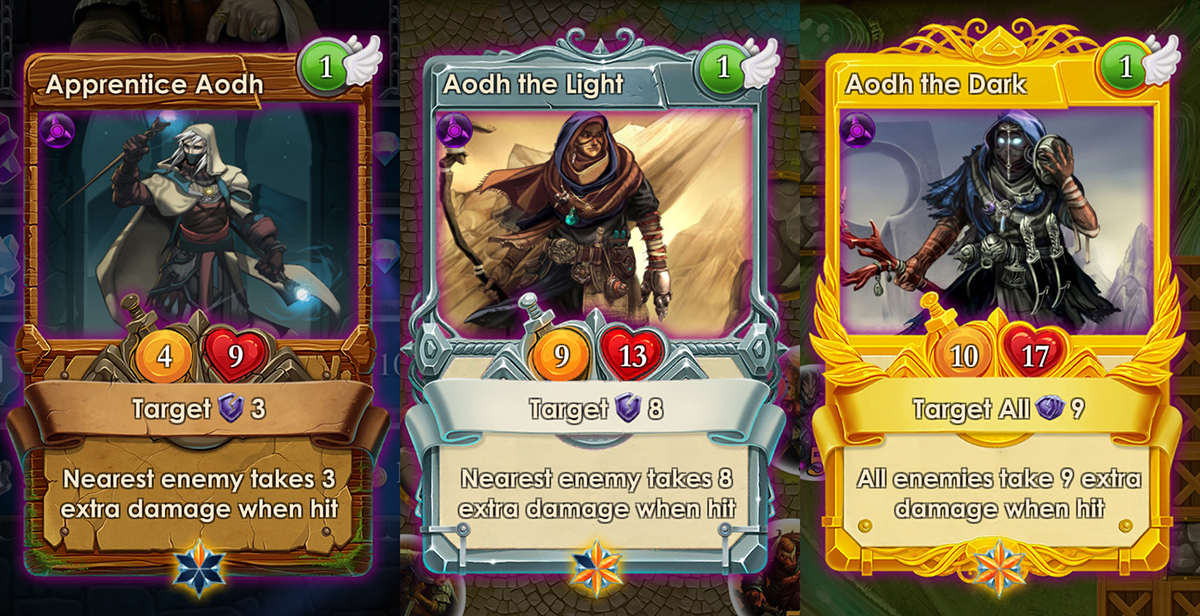 The Target All cards add extra damages to your enemies when they are hit. They are most potent when followed by a Fire All card.

The best of the Target All cards is the Legendary Aodh the Dark, 4-fused from Apprentice Aodh. It has a Health of 17, an Attack of 10 and a Strength of 9. In second position comes the Epic Papiigas, the 4-fused version of Culigas, with a Health of 10, a Strength of 6 and Attack of 9. Easier to get and very good too, the Rare Yellow Shaman is the 4-fused evolution from Spectre of Swamps.

If the best in-game card, the above mentionned Aodh the Dark, deals 9 extra damages, some blockchain crds are even stronger:  Vitali Buter Ethermage has a Target All 10 and Mushroom’s Imp deals even 12 damages when hit!

The Strength All cards increase the destructive power of your other cards by giving them more power.

Mama Grün, an Epic blockchain card, can increase the attack of the whole team by 5 (with a Health of 12 and an Attack of 4).

The Poison All spell cards deal an extra damage to all the enemies each turn.

The Poison spell has not been completely implemented yet, at this moment only 4 cards – the “Mascarade family” (all are blockchain cards) have Poison All spell: Camila Mascarade, Dimitri Mascarade (both legendary), Lysander Mascarade and Maya Mascarade (both epic).

The three defensive elements are Water, Earth and Ice. Among the defensive cards we have the Heal All, Freeze All and Shield All cards. Each of these spells can give you an advantage on the battlefield depending on the campaign, level and enemy you are fighting against.

The Heal All cards restore the Health of your team.

The card with the strongest Heal All spell is the legendary blockchain card Water Angel, healing the whole team by 12. 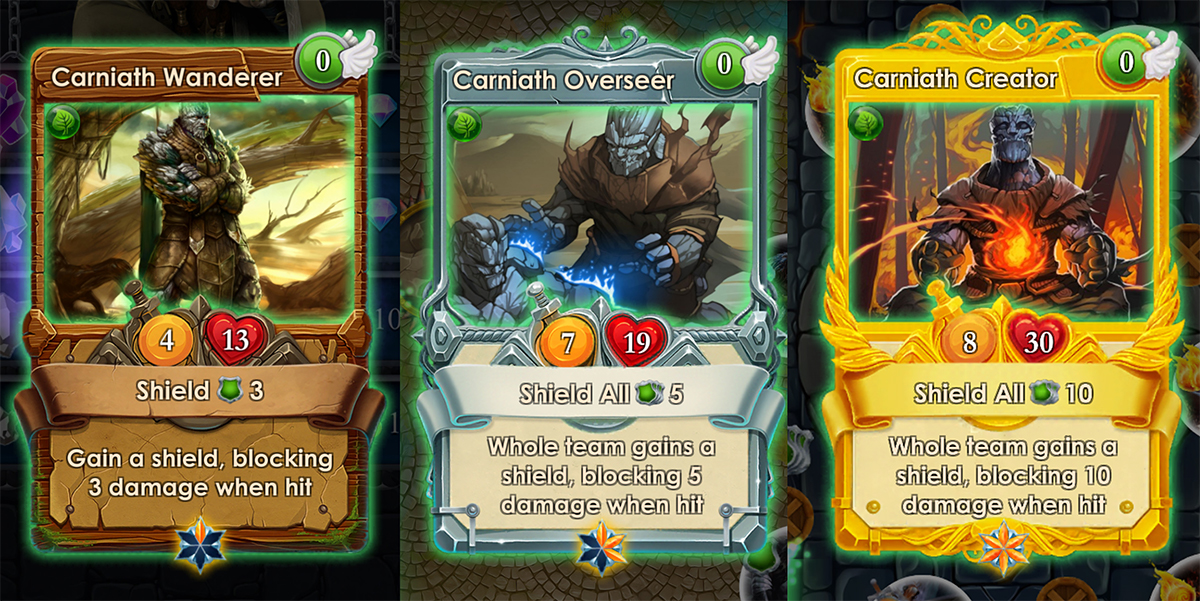 The Shield All spell temporarily protects your team against the attacks of your enemies.

The best Shield All in-game card is the Legendary Carniath Creator, 4-fused from Carniath Wanderer. It has no Speed but an impressive Health of 30. In the second place, the Epic Enchanted Shield, 4-fused from Wooden Shield, is another excellent Shield All card, with a Strength of 12 and a Health of 15. Common Viscula Scarab (Health 14) and Princess of Spring (Health 9) are good third options. This card is the result of a quad-fusion from Rare Knight of Spring, which originally has no spell.

Among the blockchain cards, the strongest Shield All protection is provided by Wooden Monster (Shield All 12).

Epic Itlan King Gar’Awall has a Speed of 2, which is ok but only increases the countdown of all your enemies by 1 point. Rare Ice Dragon (4-fused from Crystal Golem) and Epic Frozen Colossus (4-fused from Frozen Plains Golem) have 0 Speed and a Strength of 1, but may be useful in some occasions.